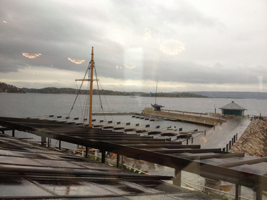 I have just come back from the bi annual Scandinavian Snoezelen conference in Asker Norway. Rompa were asked to attend the event by our Norwegian partners Klubben. The conference was a great success with nearly 200 attendees most whom came to our stand. We enjoyed lectures from as far a field as Beit Issie Shapiro based in Israel who talked about the positive impact that a Snoezelen environment can have for special needs children in a dentist. There was a lot of excitement around the imminent release of Sensory Magic  with several people asking if Rompa could go back to both Norway and Sweden to demonstrate this truly interactive solution. 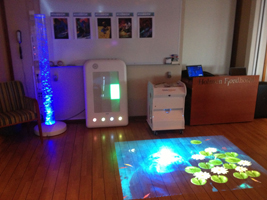 On a personnel note it was an interesting trip for me having never been to Norway before. I was impressed by the enthusiasm for the Snoezelen environment, future technologies and their incredible grasp of the English language. English truly is the second language and from the bus driver, to the hotel staff and the clients I met they were all happy and comfortable speaking our language.

The trip was not without its eventful moments though; I caught the Torp express from the airport to Asker. I was informed that this would drop me at the train station in Asker where I would meet our friends from Klubben. This did not prove to be the case as the bus dropped me on the outskirts of town. I was informed that this was as far as the bus went into Asker and I was to make the rest of my way on foot! So off I went with bag in tow through an underpass and unbelievably into the woods not speaking a word of the language or able to read the signs. Luckily it turned out to be a short walk into town and I soon found the train station.

There was also the moment when over dinner when through tears of laughter I was informed what Rompa meant Norwegian. It explains why the customs official gave my work emblazoned top such a funny look. I shall leave you to figure out the translation…