Dr Anna van der Gaag CBE talks to us about her background and the Communications Assessment Profile also known as the CASP profiling tool. 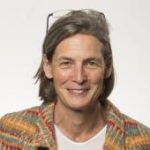 When I finished school, I had little idea of what I wanted to do, and ended up volunteering in a school for children with learning disabilities. I met Pat Stephenson, a speech and language therapist, who encouraged me to apply, despite my lack of any science A levels. Much to everyone’s surprise, I was accepted at the National Hospital College of Speech Sciences (now UCL) in London, and qualified in 1981.

Immediately after I qualified, I went to India to work as a volunteer for 8 months, and when I returned I found myself in Glasgow, where I first encountered an “Adult Training Centre” for adults with learning disabilities. It very quickly became clear that all the communication assessments that used to assess adults had been developed for children. I returned to London a few years later, determined to use my Masters degree at the University of London as a route to developing an assessment designed for use with adults. It took many more years than my masters to complete this work, and I was fortunate to have the support of various research grants that allowed me to complete the work.

The Communication Assessment Profile was first published in 1988. It remains the only communication assessment standardized with adults – over the course of three clinical trials, its reliability and validity were tested with over 350 individuals, 66 SLTs, and 384 care workers working in 21 hospitals and 31 Adult Training Centres across the UK. We were incredibly fortunate to achieve this level of testing before we published the final version of the CASP. Since then, CASP has been updated, modernised and revised, with input from UK users and therapists, and is now in its third, colour, edition. All the data from the reliability and validity studies are included in the CASP manual. I am grateful to all those who took part and to the many people who helped me along the way.

Who can use CASP?

CASP is designed for individuals with learning disabilities, used by speech and language therapists, psychologists and OTs, working with care workers, peers and families. It has also been used with young people on the autistic spectrum and with adults with dementia (particularly the section on communication environment and vocabulary use).

What was the purpose behind CASP? 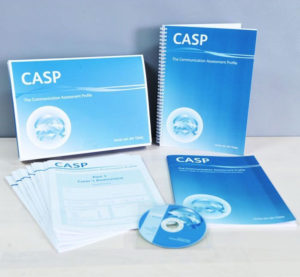 The drive behind the research was simple – to develop a way of assessing communication skills of adults with learning disabilities that was respectful, relevant and robust. This meant using age appropriate photographs and materials, like money, toothpaste and shoes, rather than toys and farm animals.

There were three other important innovations – CASP was designed as a joint assessment – in which the care worker who worked most closely with the individual – was given a formal role in assessing communication. Hard to believe, but this was highly contentious at the time, as many professionals said they did not think that an ‘unqualified’ person should have a formal role in assessment. I argued that care workers (this included family members too) were frequently the people who really knew what was happening on a day-to-day basis and knew the most about the person’s experience of communication. Click here to find out more.

The second was that the CASP assessed not only the individual’s speech and language skills, their understanding and expressive skills, but also their communication environment, and the demands made upon them to use their skills. We conducted a piece of research which showed that adults with learning disabilities under-utilise their communication skills if they live in poor communication environments (click here to read this) and published this work in a paper called ‘the view from Walter’s window’ in 1989.

The third innovation was that CASP was designed to assess and build upon the person’s strengths – now called an ‘asset based’ approach – rather than their ‘deficits’ or what the person cannot do. The final part of the assessment is when the therapists, the individual and their care worker come together to talk about ‘priorities for change’ – which might mean change in their communication or it might mean change in their environment and the way that people around them communicate.

I’m delighted that all three of these innovations – seen as radical in the 1980s, have now become mainstream, part of how we approach our work, with many new advances and further innovations along the same lines occurring across the globe. CASP is now used in other parts of Europe, Canada, the US and Australia and New Zealand as well as continuing to be used in the UK. It has stood the test of time, I think, because it reflects contemporary approaches to working with people, rather than (as was the case) doing things to them.

What’s been your inspiration?
My inspiration was a man called William, who came to me for help during my years working as an SLT in Glasgow. He helped me make a short film about the CASP, and was as excited as I was that at last there was something that respected him as an adult. He had very limited expressive skills but his understanding of language far exceeded his ability to make himself understood – and he, like others, had suffered from discrimination, having been dismissed or ignored because he could not communicate like everyone else around him.

The other inspiration was a book by Joanna Ryan, called the ‘Politics of Mental Handicap’ (the title shows how long ago that was!) in which she exposed the systemic discrimination against people with learning disabilities that existed at the time. My sense from my days working in Glasgow was that people with learning disabilities and communication difficulties experienced even more discrimination – and part of my goal was to design an assessment that they were comfortable with, that showed them the respect they deserved, and was based on rigorous research.

Over the last few decades, I have been involved in teaching, research and regulation and have worn many hats. When I look at CASP, I feel that this is work I am most proud to have started, and most pleased that it continues to have practical relevance to the lived experience of people with learning disabilities.